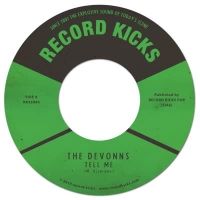 Just before the debut LP release of relatively recent Record Kicks signings The Devonns (pronounced ‘De Vaughns’ rather than like the English county home of the cream tea) comes new limited 45 single Tell Me. A jaunty lilting affair that channels pre-funk soul, the single provides enough warmth to raise both room temperature and the corners of the mouth. Based in Chicago, the band have been heavily inspired by the city’s soul music history from the 50s through to the 80s though, like fellow Record Kicks artist Tanika Charles, there’s also a sense of something more recent (the PR blah name-checks Raphael Saadiq) creeping in from time to time. The self-titled debut album follows on 3 April. Check the album video teaser below which is soundtracked by forty – er – instrumental seconds of Tell Me so, unlike the monkey, you don’t get a chance to hear Mathew Ajjarapu’s vocals. I can confirm that they are worth the wait, however.
(Out 6 March on Record Kicks)

Posted on 25th February 2020 no comments