THE BAMBOOS: Hard Up + video 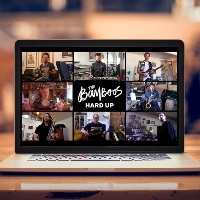 Going forward into the past in their twentieth year as a band, The Bamboos return with new single Hard Up that rediscovers the rawer sound of their early material. The mood is arguably more downbeat though with singer Kylie Auldist (who nevertheless sounds in fine fettle) delivering blues-themed lyrics such as “I don’t want a ride for free/ Ain’t no job security no more…Prices going through the roof/ What we got to give you/ Not much,” and the hook, “Now I’m hard-up/ and I’m outrun/ Everything I got/ Is hard won.” The band can be forgiven for that though – the world is going to hell in a handcart even more than usual even if it transpires that Hard Up was actually written prior to a lockdown that makes it feel even more lyrically relevant. But if the words accompanying the music are bluesy, the music itself is a sparse funky groove featuring a whistle motif, rhythmic organ grooving and a pretty good approximation of a yacht rock guitar solo on the bridge. What!? Yep – if the song captures a sense of life for normal people on the brink, I like to think of that last bit as the band’s way of symbolising an out-of-touch elite noodling while the world burns and coughs its way to apocalypse.
(Out now on Pacific Theatre Encore/BMG)