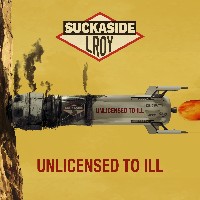 Do you miss the Beastie Boys? I miss the Beastie Boys. What better way to see in February on MB then, than to give copy space to Suckaside Vs LROY’s brand new Beasties mash-up LP. That’ll be ‘Suckaside’ as in the production alliance consisting of B-Side and Sucka Porductions and LROY as in SP’s very own brother and DJ cohort, of course. But what to name an LP featuring the vocal work of one of hip-hop’s most eclectic sampling groups who were also engaged in a sampling lawsuit so momentous, it changed the course of making music in hip-hop?  Er – well – Unlicensed To Ill of course! Turns out the project arose from an idle conversation in which the main thrust was how amusing it would be if someone put the Beasties Sure Shot ‘pella over Salt N Pepa’s Shoop beat to create a booty called Shoop Shot. You can almost visualise how an instant explosion of laughter gradually petered out into silence, eyes met and there was a sudden frantic race for the studio. Some time and twelve tracks later and – as it says on the bandcamp page – “Oh my god it’s AN homAGE!’

As the Beasties themselves would appreciate, this one picks samples with the promiscuity of an all-time Tinder legend and Salt N Pepa isn’t the half of it.  Expect the NY trio to be paired with fatback funk, The Spinners, De La Soul, Anderson Paak, Southside Movement and Metallica, among others. Shoop Shot is naturally a standout among a strong set, though Triple Magic‘s placing of Triple Trouble on Prince Paul’s Bob Dorough-sampling beat for De La Soul and What Beats Ya Want – more of a remix than a mash-up of So Whatcha Want – run it a close second and third. Unlicensed To Ill then – ch-check it out!
(Out now HERE)

Posted on 6th February 2022 no comments