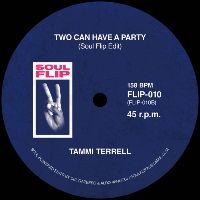 If you ever wanted proof that two can have a party look no further than the B-side of new Soul Flip 45, Soul Flip Edits 10 on which Del Gazeebo and Aldo Vanucci go buck wild with – er – Two Can Have A Party by Marvin Gaye’s favourite female duet partner, Tammi Terrell. Originally a northern soul heater for the bowling shoe n talc crowd, the extra production tweaks and leverage in this new edit make it fit to slot into a twenty-first set alongside your favourite northern soul-influenced Allergies banger. (Soul) flip things over for the headline action however and you get a rerub of a cut from someone who puts all comers to shame on the party front. That’ll be queen of swingers Ella Fitzgerald then, who was more than fifty years old when she recorded her funky soul take on The Temptations’ Get Ready in 1969. Even on its original release date it could shake it with the best of them. Now it’s had the Soul Flip re-touch treatment some fifty years later on though, it’s ready to go again – a hundred and two years since Fitzgerald’s birth.
(Out 29 May on Soul Flip Edits)