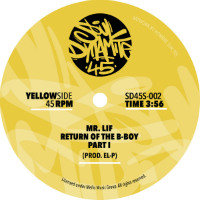 Soul Dynamite pull no punches with the follow-up to their first release and go straight for the jugular with some vintage Mr Lif fire – a 45 splitting Mr Lif’s seven-and-a-half minute Return Of The B-Boy into parts 1 and 2 – one on each side. That’s not quite as weird as it sounds for on Lif’s critically acclaimed debut full-length from ’02, I, Phantom, the El-P produced Return Of The B-Boy features a fade and then a complete change of beat change for the epic third verse. The first half is dark, space-funky boom-bap while the second half is – er – even darker, and a bit faster, space-funky boom-bap. Either side though, you’ll be able to revel in such A-grade lyrical excoriation of race relations in the States as, “They’re defacing masterpieces, just to blast to pieces/ what’s dope and hope that we’d accept a wacker thesis. Jesus!”
(Out 31 July on Soul Dynamite)