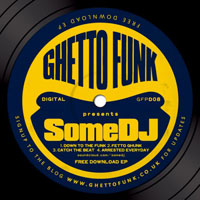 Latest in a run of freebie EPs from the mighty Ghetto Funk machine is this four-tracker from Some DJ. It would have gone up a lot earlier but for my personal battle with the mighty Apple Macintosh machine. All I can say is there’s a letter heading to California you smug-faced, air-conditioned wankers – I know where you fucking live. More difficult to track down might be Some DJ who’s struck on a unique way of avoiding both acclaim and criticism by calling himself ‘Some DJ.’ You know as in, “Hey who’s playing tonight?” “Oh some dj.” Mind you, much more of this and the punters’ll be wise to his post-modern game and it’ll be “Hang on – you mean some dj or Some DJ?” Three ghetto funk bangers at the harder end of the spectrum and a ghetto-funk/ dnb cut up of Arrested Development’s Everyday People. This has been up on the GF webby for ages now but if you still haven’t copped it now’s your chance – get it below.