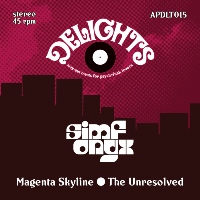 Part two of today’s news about quality psych-funk 45s in the offing, is a heads-up that next on Markey Funk’s dependably brilliant Delights label is 7″ Magenta Skyline b/w The Unresolved by SimfOnyx. As it turns out, SimfOnyx are like-minds Markey himself and Haifa-based producer Shuzin who have finally made it into the studio for a co-production.  The atmospheric Magenta Skyline is a sonic ride inspired by evening train journeys between Jerusalem and Haifa that finds a leisurely drum break emerge from a retro synth-drenched opening into a hinterland of minimal noirish sounds and eventually descend once more into a dense synthscape. The Unresolved similarly begins in a synth haze but from then on it’s a different trip entirely and very much on a chase theme tip – of the darkest possible kind.  You know the sort of thing – waking up in some sort of torture bunker followed by a mad and futile dash through damp, labyrinthine rat-infested tunnels before accepting the inevitable. Pre-orders available now.
(Out 3 July on Delights)