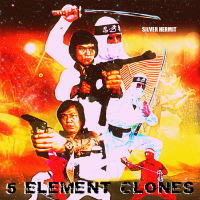 Anyone remember back in the days of tape-trading when you were so desperate to get your hands on that album that you copied a copy and ended up with a recording where the hiss was as loud as the music? Or when you borrowed your mate’s original cassette and copied it on some sketchy tape player where the motor hum was so loud it was picked up on the recording with similar results? Happily with today’s technology such problems are history. Unless you possess a Roland sampler of the 303 or 404 variety and dig underground hip-hop, in which case, apparently, a recording isn’t a recording unless it’s characterised by clicks and static (at levels that are tantamount to a fetishization of analog background noise) and sounds like it was made using samples off a worn, old VHS martial arts tape. Which it probably was if the latest work from the Jade Palace Guard – Silver Hermit’s 5 Element Clones – is anything to go by.

Apparently, in the world of SP Forums, not only are people making an artform out of hissy old samples that they use to battle with but they’re even stealing each other’s hissy, distorted old beats and then constructing narratives as preposterous as any martial arts film to explain the thefts of beats constructed from snippets which have been – er – stolen – from old films. Usually ninja films. Hang on – lo-fi hip-hop, ninja films – anyone reminded Lord Beatjitzu‘s production work for Lone Ninja? Funny that, since Beatjitzu’s involved in this somehow, along with like minds the Jade Palace Guard and some guy named Lord Motuidee who is either an alias of Lord Beatjitzu or his mortal enemy. Oh – and then of course there’s Silver Hermit. Whoever he is. Confused? Welcome to the world of SP Forum beat battles where no man’s dodgy old samples are safe and identities are as fluid as interpretations of the word ‘theft.’
(Free digital download below/ $7 dollar physical release for cassette freaks at the start of next month)