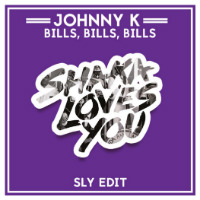 Coming through with the summer soul goodness once again are Shaka Loves You with their edit of Bills Bills Bills. Oh what – as in Destiny’s Child? Nope – as even the first second will reveal a genuine seventies funk source rather than 90s rnb courtesy of Shek’spere. This is of course an edit of Johnny K’s 1973 Miami soul cut I Got Bills To Pay – penned by no less a man than Clarence Reid a.k.a Blowfly – not that the original is immediately recognisable though. Why? Well, there’s been chopping, there’s been looping, there’s been pitching of vocals and tweaking of percussion and bpms all bent upon a single purpose of ending up with something a whole lot more for the dancefloor. And yet despite this, the seventies DNA of the source material is more or less maintained throughout. No mean feat. Cop it below along with the boys’ from their Summer Sessions Vol. 4 mixtape on which the edit also features.