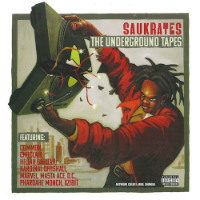 Right then who’s up for a Socratic dialogue? Didn’t think so, but what about a hefty helping of Saukratic monologue? Yes, that’s more like it. Could there be some material by veteran Canadian emcee, Saukrates, in the offing? Yes, there could because his 1999 debut studio LP The Underground Tapes has been re-mastered and re-released along with no less than five extras and remixes bringing the total tracks on it up to a whopping twenty-four. But does it still kick it?

Pretty much, yep. The Underground Tapes was released at the height of the underground hip-hop boom of the late 90s/ early 2000s broadly contemporaneously with Pharoahe Monch’s Internal Affairs, Blackalicious’s Nia and The High & Mighty’s Home Field Advantage among the likes of which it comfortably sits. Musically, it is variously characterised by a subby bass-synth sound often, sung rnb-style hooks occasionally and, of course, Saukrates’ distinctive flows, always. And while he might be Canadian, damn if he doesn’t sound a tiny bit like Jeru The Damaja. You can always judge a man by his guest spots and Saukrates’ (who include Pharoahe Monch, Xzibit, Common, OC, and Masta Ace!) indicate his calibre. Highlights include the earth-moving, bass-powered poon-hound rap Bag Da Biscuit and epic blaxploitation cum spy-flick narrative The Professional on which Sauks manages to land a plane, kill the baddies and sleep with Cleopatra Jones. Nice work.
(Out now)