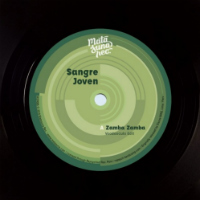 Getting hold of an original 1975 vinyl 7″ of Zamba Zamba by Sangre Joven (a.k.a. their cover of Elkin & Nelson’s Samba Samba) has hitherto been something of a mission. As indeed has been finding out anything about this Peruvian outfit who, hitherto, have registered a big fat zero on interweb searches. Matasuna Records are not a label to be put off by the effort though – especially when they’ve got a re-issue in mind and a bit of help from a Peruvian friend. No not the powdery kind! An actual Peruvian friend. Which is why you will shortly be able to avail yourself of a copy of this hard-to-find Afro-Latin dancefoor funk cut once again on 45. And they’ve not only restored the track from the reel-to-reel master tapes but also got The Carvery in London to sort out a new master. It only remains to sort out the flip. Let me see now – perhaps a Voodoocuts edit, yeah, with even more dancefloor oomph? Yep – that should do it!
(Out 7 September on Matasuna Records)