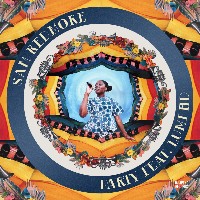 Flavour of the month over at Jalapeno Records right now is Sam Redmore and here he is with new single Party featuring Redmore’s longtime friend Lumi HD. The track opens with just its 90bpm drum break followed by claps, then bass, trumpet, Rhodes, vibraphone and assorted other layers joining in. Once things achieve soul jazz lift-off, in comes Lumi admonishing someone for attempting to slope out of ‘the party’. The absence of lyrics of specifics about said party (who’s doing what in the bathroom, what happened to all the vodka, and who the guy in the corner is that nobody knows) lead one to suspect there is perhaps a metaphorical level to the lyrics as well. Then again, it does lend the song an air of universality enabling it to be played at any party. Ponder that while you’re having a shimmy.
(Out now on Jalapeno Records)