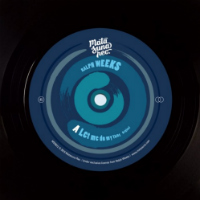 Alright, so it’s a bit longer than a month between releases this time but who’s going to complain if it’s this large – only a 45 re-press of Ralph Weeks’ massive Panamanian funk bomb Let Me Do My Thing! One of the monkey’s favourite Latin funk tracks ever, the 1971 original – recorded by Weeks with band Los Dinamicos Exciters is hard to find and hundreds of quid if you do so this is an essential purchase. What to put on the flip though? Perhaps a quick call to Voodoocuts, whose edit work had appeared on a couple of previous Matasuna drops, and check to see if it’s possible to use his formerly digital-only bomb-track remix of this banger with it’s extended parts and extra beats…it is! Treble Secos all round!
(Out 17 May on Matasuna Records)