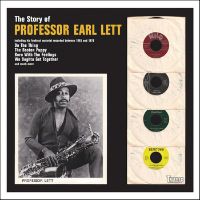 Mad Professor, Large Professor, Professor Longhair…the world of beats is rife with talented performers who’ve adopted learned titles of dubious authenticity. Here’s another one – Professor Earl Letts – and while, again, there’s some doubt as to his academic standing there’s no such ambiguity about his sax playing, soul vocals or compositional skills. Or his swagger. Check him out on the cover – he looks like Jimi’s older sax-toting brother – talk about I get stoned, I can’t go home/ I’m calling long distance by public saxophone. That’s what I’m talking about.

The Story Of Professor Earl Lett is the first time Lett’s funky 45s from the sixties and seventies have been compiled altogether. Sound familiar? Yep – it’s Tramp Records again – doing what they do best – i.e. giving long overdue recognition to the forgotten and lesser known stars of the soul and funk explosion from the golden age. The pattern of this 12 track set (18 if you get the cd) follows the usual formula (i.e a broadly chronological journey through the collected 45s) starting all the way back in 1964 with the rnb instro Monkey’s Tail (complete with twenty-five second ‘Wipeout‘-style drum solo) and moving onto the crusty (and I do mean crusty) old vintage funky soul of an LP highlight Do The Thing. Another highlight is the sleazy funk of Green Power Pt. 1 (which hippies may be disappointed to learn is about money rather than the environment) of which you get the instrumental and much slicker, more uptempo and equally dope LP version if you cop the cd. Elsewhere, you’ll find Lett doing jazzy funk on Take Twenty, dropping the Isaac Hayes-ish Theme From Canada and space funk on The Funky Professor. Another sureshot from the Tramp assembly line, then.
(Out 2 September on Tramp Records)