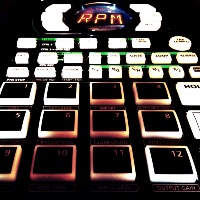 Pimpernel Jones – now there’s a man who likes a challenge – the RPM Challenge in particular. You know the one: write and record 10 songs or thirty-five minutes of original material inside a month. Not any old month mind, but the shortest month of the year, February. Of course, he managed it last year with the head-nod beats of his RPM 2019 and since the RPM organisers were sticking to their staid old criteria, clearly the stakes needed upping this time around. What better hurdle to add to the mix then than to upgrade your studio computer at the same time? It’s the sort of thing that could find you uploading the final thirty minutes of your music to Twitch in a last minute effort to succeed which is indeed the predicament that our Pimpernel found himself in. But did he make it?

You know he did! Only ten tracks this time around (though as noted above – it’s not like he made things easy for himself) – the results are nevertheless a treat for the ears. Once again, it’s clear from the off that we’re in Jones’ trademark nineties downtempo territory with the soothing piano-led boom-bap of Bust One Two. Old Flames meanwhile makes use of a soul hook to provide an occasional hook for its Mo Wax-isms while Chime-Fi, does what it says on the tin – chimes (along with old vocal film samples and a bit of synth keys) provide the icing on the cake of another chilled beat that evokes Japanese Anime OSTs. That’s a vibe also evoked on 5 Bar Jump while Night Bus and some of the other shorter cuts border on the ambient. Closer Last Track Of The Night, extends the ambience with an insectoid beat adorned, appropriately enough, with the blue sounds of a smoky jazz club at four in the morning – no doubt capturing Jones’ sense of chill after he managed to submit this for the deadline.
(Out now HERE)