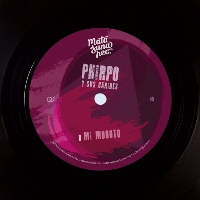 Matasuna Records bring that funky Latin heat again – this time with a double helping from Venezuelan Porfi Jiminez’ Phirpo Y Sus Caribes outfit. The A-side Comencemos is a cover of Ginger Baker-powered Fela Kuti track Let’s Start upping the tempo very slightly and subtly Latin-ising the feel of the track. Arguably even better is flip Mi Moooto, a Jiminez original that, as the title suggests eulogises his motorcyle over a funked-up salsa groove. This release has been officially licensed by Jiminez’ family and it’s first time for both cuts on the same 45 – though they both originally appeared on Phirpo Y Sus Caribes’ 1972 LP Parrilla Cariente and each has had a previous separate 45 release. You know this ain’t gonna hang around!
(Out now on Matasuna Records)