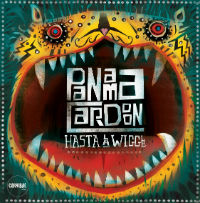 If you were wondering why there hadn’t been much action from Panama Cardoon and the Carnibal Records stable recently, here’s your answer. After a few years of booties and remixes on such labels as Resense, Bombastic Jam and Danny Massure’s Spring Strut, Carnibal main-man Cardoon is releasing his debut LP Hasta La Wiggle on which he gives full rein to his twin loves of latin breaks and reggae beats.

While there might be no surprises in terms of the sort of content to be found on Hasta La Wiggle though, you might raise an eyebrow at its brevity – thirty nine minutes is hardly an odyssey. Yet the canny Athenian manages to squeeze in eleven tracks and still leave you wanting more. Highlights include – well – most of it to be honest but especially reggae reboot Upnaked, the centrepiece of Don’t Let Me Know (massive bashment beat, cheeky rhyme from BnC and a super catchy female hook), the fat latin breaks on El Ausente , retro laundry-anthem Dubbydeo and the dubbed-out Besame complete with west coast psychedelic trimmings.

Most similar to efforts by fellow travellers Daytoner and Andy Taylor this is a shoe-in to appeal to a similar audience. Hasta la wiggle, baby!
(Out 22 April on Carnibal Records)