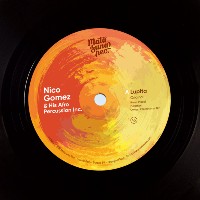 Look sharp, here’s another re-press for Nico Gomez’s Lupita and this time it’s Latin-loving label Matasuna who deliver the goods. Everyone who knows anything about Gomez knows he was one of the greatest ever producers of funky Latin and Afro-Latin music as revealed by his 1971 LP, Ritual (on which Lupita can be found) along with his songwriting for Los Chakachas. And like Los Chakachas (who were Belgian) Gomez wasn’t actually Central or South American either but Dutch. He did spend a considerable portion of his youth in the Caribbean however, which certainly rubbed off when it came to his music. The clattery funk of Lupita is probably the best known cut off Ritual and it comes here with a beat-heavy flip from the Whiskey Barons’ Bosq – well worth it if you missed the Voodoocuts remix did a few years ago