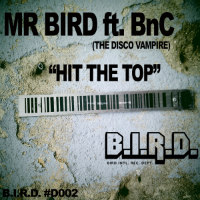 Not content with remixing the likes of The Herbaliser, Mr Bird has his own hip-hop business out right now. Yep – he’s aiming high in the company of rapper Bruises N Cuts a.k.a BnC a.k.a. the Disco Vampire with new single Hit The Top. This’ll be the second release on the B.I.R.D. label which you’ll be totally unsurprised to hear is Bird’s own label. The track itself turns on a beat which features the sort of insistent disco bass pulse that characterised the earliest hip-hop releases but is lent an contemporary edge via numerous production flourishes and some moody guitar loops. BnC meanwhile is all businesslike in his dropping of party rhymes, “We rock this hard like stone/ That type of funk we own/ And if you’re liking the taste, then turn up the bass/ And rattle up the cage in your dome.” Yes sir, Mr Vampire. Right you are Mr Vampire.
(Out now on B.I.R.D.)

Posted on 9th October 2018 no comments