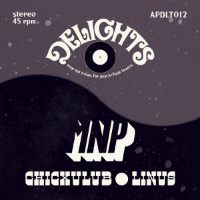 It’s October, the ominous shadow of Halloween beckons and MNP deliver the darkness with new slice of psych, Chicxulub, on Markey Funk’s ever-reliable Delights label. Apparently named after the Mexican crater made by a certain dinosaur-extinction causing asteroid, the track certainly spreads its retro-crime soundtrack vibes like an apocalyptic dust cloud. Cue the listener positively enveloped in morbid grainy visions of bodies in dank alleyways and men in brown suits and big shades stepping out of Ford Cortina Mk 1s. Or something. Perhaps a bit of lightness on the flip? Well, relatively, as Markey Funk himself enters to add the retro-exotic icing to Linus – a slo-mo slab of crime-funk with more neck-snap than a choke-hold in a Turkish police cell.
(Out now on Delights)

Posted on 5th October 2019 no comments