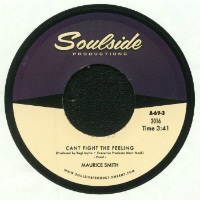 If you missed Maurice Smith’s Delta Soul EP back in the summer on which this self-proclaimed ‘old soul’ went fully 1960s, now’s your chance to catch up with a 45 of that release’s best cut, Can’t Fight The Feeling, in all its seven inch vinyl glory. The cut is a chanking uptempo northern soul stomper on which Smith does his best Marvin Gaye impression and declares his helpless attraction to a lady. This completes a trio of neo-northern soul cuts from Souside Records this year following the Nolan Porter’s Go Go Go and Lina’s Dip, bangers every one.

Posted on 16th December 2017 no comments