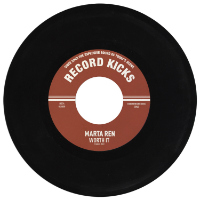 “Was it worth it? Am I worth it? The pain ain’t worth it? I don’t know,” sings Marta Ren on the hook of new 45 Worth It – like she doesn’t already know the answer. Of course it was worth it! We commence with the rumbling bass, funky drums of a heavy mid-tempo soul groove, in comes some tremelo guitar and then the Porto soul queen is off, “Something told me this was a trap.” No – they’re having you on my love, this is just the thing! But what is she singing about? An unwise new affair? A unwise re-kindling of an old one? Or just a continued relationship with the music industry! There are shadows every which way you look – which means the video set in a darkened theatre is most apt. Still getting together with Emre Ramazanoglu (producer for Lily Allen and Mark Ronson) does rather seem to be working out. An LP follows early next year.
(Out now on Record Kicks)