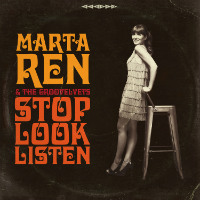 Well it’s about bloody time isn’t it? When was this originally promised again? End of 2014 or something? Is its title a description of what the band have been up to for the last two odd years perhaps? Who knows? But it’s impossible to stay mad at Marta Ren & The Groovevelvets for long since they’re about to deliver the blistering Stop, Look, Listen – one of the most convincing Euro-based deep funk sets in many a long year.

The eight-piece band first blew up three years ago with the massive, all-original sister funk cut Two Kinds Of Men showcasing a tight arrangement, a keen ear for classic tunesmithery and (as the hook make perfectly clear) the mighty voice of Marta Ren. Since then there’s been practically nothing until November’s remarkably faithful cover of Lucille Matthis’ southern soul bomb I’m Not Your Regular Woman. Both are of course high points of the LP but they’re far from the only ones and find their equals in the likes of stank heavy soul groove Release Me which bumps along like a good ‘un and It’s Today – a scorching uptempo funky workout.

There are also a number of surprises. Four tracks in and the band suddenly switch from uptempo funky soul to smoothy soul jazz number Smiling Faces which reveals what Sade might have sounded like had her career begun in the late sixties. Later on there’s room for the noirish pomp of torch song So Long which feels like the appropriate LP closer you might expect – except that it’s not the closer and the band can’t resist one more crack of the funky whip and go out on one of the LP’s fastest cuts – the frantic I Wanna Go Back. Not to mention that between one end and t’other there’s also room for afrofunk instro Be Ma Fela. Well, a girl’s got to have her rest.

Of course, if you going to put as much soul into your debut as the band have done, you’d better make sure you record it right. Luckily the Groovelvets not only snaffled access to an old eight-track Ampex tape machine but then had everything shipped to New York for Andy VanDette – a man who’s helmed the the likes of Bowie, Beastie Boys Jon McLaughlin and Jon Spencer Blues Explosion – to master. And I don’t think there’ll be anyone arguing with that kind of pedigree. After all, it’s the sort of thing that makes you stop, look and listen.
(Out 19 February on Record Kicks)

One Response to MARTA REN & THE GROOVELVETS: Stop, Look, Listen (2016)