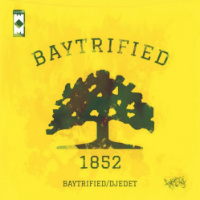 The JTHOTEC-featuring Baytrified finds thatmanmunkz switching from his Pan Amsterdam project with Leron Thomas back to his other going hip-hop concern, Madison Washington, with Bay Area native Malik Ameer as MC. And with a name like Baytrified – what else was it going to be but a celebration of Ameer’s beloved Bay Area? Except hold on – what’s this? “The Bay ain’t the bay no mo’?” Turns out the place is doing the, “gentrification dance just so that the singularity can advance.” Gahh – bloody hipsters – they’re everywhere. No wonder the beat is a weird off-kilter affair based around a drum loop with a time signature lurch within the drum loop and falsetto P-Funk wailing. How to represent such goings-on in audio visual format though? Perhaps footage of white hippies and afro-American folks happily interacting before the man, caught unawares by the summer of love, shook off his disorientation and brutally re-established the status quo. Hmm – yes – better get a bit of the Panthers in there too just to show the man the people aren’t going to take shit lying down. Meanwhile the Brian Lee Settles-featuring digi-flipside plies a bit of afro-retro-futurism in the P-Funk meets Gil Scott Heron vein. Check the vid below.
(Out now on Def Presse)