LUCKY BROWN & THE SGs: Pecan Trees Speak To Each Other EP 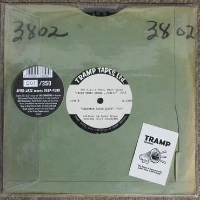 Hello it’s the new Lucky Brown & The SGs EP – Pecan Trees Speak To Each Other. Of course they do – especially if you’ve been on the mescaline. Not that this release is that trippy though there is a ’69/’70 Ethio-jazz-fusion vibe going on with the title track, opening the release in its full six minute forty nine second version. If you’re not one for lengthy arboreal gossip however, Lucky and the crew have got you sorted by also including the more terse three minute forty four second edit. The balance of tracks is made up of raw uptempo funk instro Scavenge Patch and the monkey’s favourite – a loose-limbed, even better than the original, alternate take of ‘Bout To Blow which shares common ground with the sort of instro G Love & Special Sauce might have knocked out a quarter century ago. And you can cop all that on the less-travelled path of 10″ wax right now.
(Out now on Tramp Records)