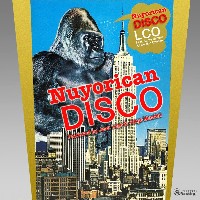 Los Charly’s Orchestra return next week with the 130th release from Imagenes Recordings and a track that pays tribute to Latin fusion culture.  That’ll be Nuyorican Disco then, which is about as Latin as a disco biscuit can get, replete with jangly funk guitar, slap bass, retro ‘laser fire’ FX, layers of percussion, fiery Latin horns and Latin vocal motifs courtesy of Andre Espeut and Oswaldo
Chacon honouring back-in-the-day dons like Joe Bataan and Willie Colon.  Play this and you won’t be able to keep them off the dancefloor with the shitty end of a stick! Also comes with an instrumental version and the more minimal Neo Latin Mix.  In fact the only thing that’s missing as far as this release is concerned is a twelve inch version since it’s sadly only available as a digital release.
(Out 25 November on Imagenes Recordings)