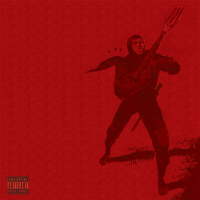 Silent as cherry blossom falling, Lone Ninja has returned. I hope you’re ready for a wave of carnage. Not literally of course – it’s just that Wave Of Carnage is the title of the new opus prepped by the covert mic marauder to sweep all before it in a tsunami of beats and rhymes.

Listen carefully and you may note that the production is less lo-fi than on previous LPs but maybe that’s because fulfilling the role of beat retainer this time around is JBL The Titan rather than previous incumbents June Marx, Lord Beatjitzu or Lord Gamma. Unless of course they’re all the same person – who knows what to believe of those who inhabit the shadows? Also look out for the odd mic turn from fellow Twin Peril June Marx (again) and DJ TMB who certainly makes his presence felt on Imposing Will with a flurry of shuriken – sorry – scratching.

As with all previous drops there is a solid thematic focus on embattlement though if anything, even more so than usual. Is this a comment on US society as it contemplates renewed war in the middle East, worries about Russian aggression in Ukraine, worries about Chinese economic expansion everywhere, ponders indecisively what to do about Ebola and watches while its police once again ignite racial conflagration within its own borders? I could tell you but then I’d have to kill you. We remain in the familiar territory of martial arts film samples though (“Now’s your chance to convince me of your loyalty – all you’ve gotta do is decapitate your friend there!”) and it’s open season lyrically on all-comers on, for example, Defense Perimeter, “Slice, sever, apply pressure/ The night of terrors, my vice is my pleasure…Slicing their necks, slice with vicious cuts/ I can care less, I don’t give a fuck!”

Keep your ears peeled for LP highlight Valley Of Hell and bear in mind that it’s probably best not to piss the man off. Last thing you need is a little visit in the night, eh? Sample the carnage below with the most recent leak Defense Perimeter and preview all the carnage HERE.
(Out now on Holographic Pagoda)