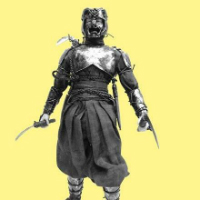 Not had enough Lone Ninja recently, eh? Let the man himself emerge from the shadows to rectify that right now with new single Rise To Power, featuring Killarmy’s Kinetic 9 and produced by Blaq Mask. Could it be yet another harbinger of the long-awaited (but still not here) Day Of Reckoning LP? It certainly could. Expect epic synths, the sounds of an epic storm and more combat-based threats than you can shake a pair of small Trump-like hands at. Kinetic’s up first, flinging missiles around and ‘tearing up’ some nurse’s ‘ass,’ as if channeling the gammon-in-chief himself before the arrival around the halfway mark of veteran outré threat-lobber Lone Ninja: “Charged with shots, I lurk in the hurt locker/ Sergeant Rock, I merc as I burst chakra…it’s simply lights out, yo, I’m that deadly/ Your infantry wiped out – I’m combat Kelly.” Have it!

Posted on 21st December 2019 no comments