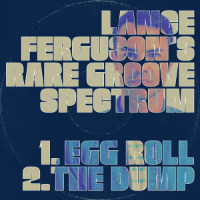 Egg rolls might traditionally be served as appetizers but Lance Ferguson of Bamboos fame is providing the full funky main course with his cover of the M&S Band classic Egg Roll. The original, you may remember, was rediscovered by the mighty Keb Darge back in his deep funk days. The Scotsman discovered the only known copy on acetate and before you could say ‘that wants re-issuing sharpish,’ the thing had been cleaned up and put out by Jazzman Records. And so to Ferguson’s version – which plays it pretty straight in terms of a cover. Er – so what’s the point you ask. Well, the original was only just over two minutes long whereas this is more than three minutes long. Of the forthcoming Rare Groove Spectrum covers LP (of which this single is the sampler) Ferguson says, “Sometimes we’re extending what may be a really short track into something longer, or teasing out the elements in a song that really make it work on a dance-floor. It’s essentially what someone does with a club re-edit, except we went the extra step and re-recorded the whole thing with a live band.” I don’t think he’ll find anyone complaining. The flip is the band’s drum break-tastic take on the Soul Vibrations The Dump – wait for the bridge!
(Out 16 November on Freestyle Records)