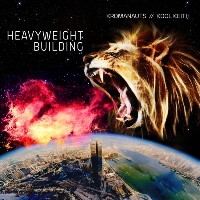 Leaving their more customary reggae-based beats to the side, DC’s Kromanauts make good on their promise to explore the ‘entire spectrum of the chromosphere’ on Heavyweight Building with a guest slot from hip-hop heavyweight Kool Keith and a beat that harks back to the Dan The Automator-produced days of Keith’s Dr Octagon alter-ego. Of course mere 4/4 time won’t cut the weird with these guys so it’s all about the 6/8 signature and off-kilter synth sounds over which Keith can drop arcane lyrical science. Also comes in instrumental and acapella forms.
(Out 17 April HERE)