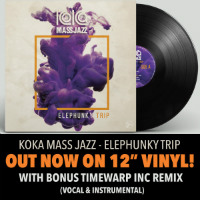 Koka Mass Jazz’s Elephunky Trip twelve inch is the new piece of vinyl out from Timewarp Music and, perhaps surprisingly, is only the long-running label’s second wax drop. To all intents and purposes, this previously digital-only release is a mini-LP with seven original tracks on it, plus a second version of one of these by the band along with vocal and instro versions of another of the tracks by label owner Timewarp. And while it might bear a similar name to a certain early noughties Black-Eyed Peas album, the vibe here is definitely not stadium hip-hop as indicated by Tiffany Blu-featuring opener Play The Game which rocks heavily bluesy guitar and organ over which Blu employs her best Delta accent. The subsequent and far brisker instro At This Moment provides jazz-funk instro thrills and is something of a kindred spirit to the squelchy wah-wah and broken beats of second Tiffany Blu vehicle Summer Soul. This latter is the one that the band supply an 12″-only bonus ‘Acapulko’ version of, featuring a sparser more percussion-heavy arrangement. Another vocalist, Krista, lends her pipes to the funky rnb-ish lurch of Fight Fire and the organic nu-disco vibes of Day & Night while a third, Boyan Levchev, appears on both blues-funky closer Why and the boogie-ish stylings of Getting Better. All of which just leaves space for Timewarp’s excellent 90s hip-hop beat-style Play The Game remix – of which an instrumental version is also included. Factor in the always excellent Timewarp mastering dimension and Elephunky Trip is properly something to flap your ears about.
(Out now on Timewarp Music)