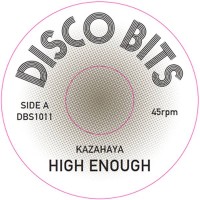 It’s pumping disco mash-up bizniz from the Disco Bits crew once again as they find a kindred spirit only too willing to bathe his work in the glittering coke-dusted light of the mirrorball. That’ll be sometime hip-hop producer Kazahaya then – a man clearly as spiritually at home in Studio 54 as he is at The Latin Quarter. High Enough splices Rare Pleasure’s Let Me Down Easy into Ain’t No Mountain High Enough – the latter possibly Inner Life’s version – but either way a sureshot for those of the a four-to-the-floor persuasion. If that’s not your bag – flip things over to the monkey’s preferred cut where it’s all about the lushly-orchestrated strings on the funkier syncopated bedrock of Forever. Frankly, between the pair of them, these two cuts could keep you high enough forever.
(Out now on Disco Bits)

Posted on 19th February 2020 no comments