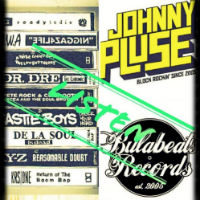 Irish breakbeat force of nature Johnnypluse has got a new single and video, Listen, out soon and it’s described here as sounding like, “Oasis drinking with the Chemical Brothers in a 90s warehouse.” In case you thought that was former UK number one Setting Sun, please note that was Oasis collaborating with the Chemicals not Oasis drinking with the Chemicals as it is here. “Hey our Noel, what’s all this hip-hop she-iiiiiite?” “Fook off our kid, this is the future of music – like what them Chemical Cousins are doing – we should have drink with them and then a punch-up.” “Not sure they’re into punch-ups our Noel. Let’s have one first and then the drink and then make some proper fookin music.” Wisely however, the track sounds like ‘Oasis’ were the junior partner in any such imagined collaboration – as, funnily enough, they actually were when it really happened back in the day. In this instance though, the imagined Mancunian dad-rock-influenced contribution is safely confined to some guitar chords amid the breaks and bass whereas back in the day it was safely confined to some vocals. Appropriately, the video also sees the interaction of two utterly different elements though in this case, happily, one of them is not a brace of gurning rockstars in Stone Island smocks. And so it is that footage of the Devil’s own musical format, the audio cassette is juxtaposed with that of a headless smooth mover in white Air Force Ones. Listen (and watch) below.
(Out 10 Sept. on Bulabeats Records)

Posted on 4th September 2018 no comments