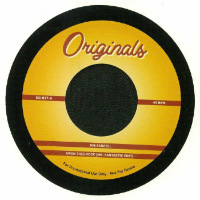 The original release of saxophonist Joe Farrell’s funky jazz-rock epic Upon This Rock from 1974 is around twelve minutes long and takes a good three and a half minutes of ‘fusion’-style farting about before it even gets funky – though when it does get funky, it gets very funky indeed. So much so in fact that Artifacts, Method Man, Common, Redman and Kanye West have all plundered the track for their own beats at one time or other. You can check Artifacts stripped-back nineties usage of said cut on Whassup Now Muthafucka which forms the B side of this new Originals 45 though it might well be Mr Fantastic’s splendid edit on the A side which most floats your boat. Comparing it with the original, you can pretty much intuit his thought process. Drum-break at start? Keep that. Tedious prog-wank guitar bit next Definitely ditch that. Squelchy wah-wah funk guitar bit in the middle? Keep that. Sax solo? Shorten that. Prog bollocks at the end? Chop the drum fills out of that, tidy everything up and I think we’re good to go!
(Out now on Originals)