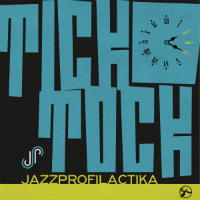 JazzProfilactika? Now there’s a name to conjure with. But let’s roll on instead to Tick Tock the new nine-track album from the Bulgarian four-piece who consist of a turntablist, a saxophonist, a trumpet and flugelhorn player and keys and French horn player and who started out as an alliance of like-minded djs nearly ten years ago. Along the way, the dj trio became a quintet, instruments came to the fore, and by 2015 an album’s-worth of tracks had been recorded when disaster struck. Turns out the band’s close friend and sound engineer passed away and things were temporarily put on hold. Happily the tracks eventually got mixed and mastered and the band clambered aboard the good ship Timewarp Music and became part of the crew just this year.

For those who dug the Jazzmatazz projects put together by the late, lamented Guru of Gang Starr, or even the stylings of 90s Blue Note-raiders Us3, the vibe will be familiar. Which means you can expect a variety of tempos and beats that are never less than jazz-funky from the lazy, hazy Fourplay to the itchy latin jazz funk of opener Calle De Cubo and the scratch-adorned uptempo antics of Samboppa.
(Out now on Timewarp Music)

Posted on 7th November 2017 no comments