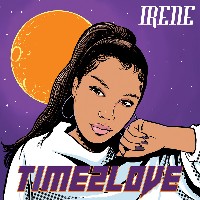 If you dig 00s-style R&B of the Aaliyah and Brandy variety (you remember – back before Kanye and The Black-Eyed Peas changed, among other things, the drum pattern paradigm for hip-hop and R&B and ruined it), you’re about to fall in love with Irene’s Time 2 Love long player. The nine-tracker is produced by Athenian RSN who more than nods to the R&B sound of, blimey, is it twenty years ago now (?) while at the same time managing not to sound too dated either. Turns out the album is a concept effort tracking Irene’s progress from breakup and heartache through to self-affirmation. To this end, it opens with Wishing Star which, as you might expect, is a tad melancholy and ending with Your Valeria, featuring producer labelmate Mr Collage – and which is, er, actually not a whole lot lighter in tone. In between lie Whatsa Say with its killer bassline and general slo-mo trip-hop-meets-early-Destiny’s Child beat, the even more trip-hop-meets-noughties R&B of Against The Old Times and the LP’s liveliest cut – featuring a bleepy, stuttery chopped up blues-powered beat. Oh – and let’s not forget an almost Badu-ish turn on penultimate cut I Keep Calling. Time 2 Love then – harking back to an era of R&B before the arrival of autotune and much of the electronica that now encumbers it.
(Out now on Mind The Wax)