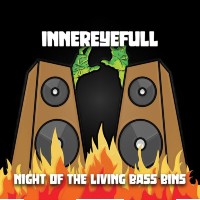 Inneryefull’s latest long player, Night Of The Living Bassbins, has finally emerged then and is anything but a rotting corpse. Twelve tracks deep it supplies, (as previous singles Shake That Thing, the title track and Music Is Alive suggested) a heady mix of breakbeats and reggae, the former of which range from club-ready bangers to the positively ambient while the latter includes a heavy dose of blissed-out riddims, reggae soul, club vibes, stoner dub grooves and a skanking dnb effort. Shall we have a track by track breakdown? Why not…

1. FUNKTRO
A funky instro intro? Kind of. B-boy breaks, trombone from none other than Ashley Slater and a five minute length that belies the sort of one minute intro you’d expect from such a name

2. SHAKE THAT THING
Don’t mind if I do! Starts with beat-boxing, bass and drums kick in, then bongos and congas, and finally guitars, organs and the horns. A veritable layer cake of shake!

3. BRING IT ON
Fighting talk? Not with blissful female vox and a chilled reggae groove like this

5. MUSIC IS ALIVE
It certainly is, and aiding and abetting it on this liquid slice of hip-hop is MC Kurnel.

6. HOW YOU LOOK AT IT (BIG BLUE EYES)
Scratching, ambience, Morcheeba-ish female vox…how you want to look at that? The monkey’s looking at it like it’s 1995 – is it me or is it getting smokey in here?

9. SHINE A LIGHT
…as will more blissful female vocal reggae

10. INDEPENDENT MIND
Now there’s something sorely lacking these days, but dub will see you right again

11. NIGHT OF THE LIVING BASS BINS
A.k.a. the one that melds the reggae and the breaks – coming on like Ghost Town channelled through a prism of the subtler end of late 90s big beat.

12. WISE STEPPER
A wise stepper once said to me, ‘Have you heard the one about the reggae/ dnb album closer crossover? – it’s full of anti-system wisdom.’

COMMENTS: Who says a life led playing festivals and living the rest of the time in Cornwall is bad for your creativity? Now if Covid-19 could just slope off and die it this could get rinsed live and who knows – it could all be about Dawn Of The Bassbins very shortly.

BEST TRACKS: Bring It On, Music Is Alive, Independent Mind, Night Of The Living Bass Bins