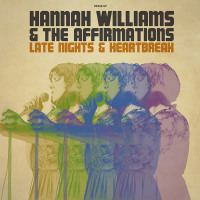 Earlier this year, Hannah Williams arose like a phoenix from the ashes of previous funk-soul outfit Hannah Williams & The Tastemakers and made a grand re-entrance to the world of funk and soul with brand new band, Hannah Williams & The Affirmations, and glorious single Tame In The Water to boot. This was followed just last week with an epic psych-funk cover of the Jake Holmes song, Dazed & Confused, that Led Zeppelin made famous. Where to go next? An album perhaps? Called Late Nights & Heartbreak? Produced by The Heliocentrics’ mainman and serial DJ Shadow, Madlib and Quantic collaborator Malcolm Catto? Surely such a momentous event demands a track-by-track investigation? Of course it does! Let’s a have a gander…

1. TAME IN THE WATER
A.k.a the polar opposite of lame in the water. Soaring gospel-vocal stylings over a loose swampy funk-soul groove. Straight fire – top that you smartarses!

4. WOMAN GOT SOUL
True that. Slow n low funky soul, super-catchy hook and probably a massive live favourite that positively encourages active participation from fifty per cent of the audience. Fat break in the middle too…

5. AIN’T ENOUGH
Hit me hard! That’s funky soul right there. Open with a break and tight horns in the pocket and then lyrically stick it to the man. The perfect song for the day a man named after a guff made it to presidential status.

6. FOOL
A.k.a. time to mine that old lyrical soul staple of telling the unreliable object of your affection to up their game…

7. LATE NIGHTS AND HEARTBREAK
…in case you end up all alone and singing an emotional downtempo torch song such as this

9. STILL IN MY HEAD
Fuck me – that’s more like – BIG HORNS! Breaks! Soul! That’s how you lecture a (former) lover about having to live with all their shit! Belt it out Hannah!

10. CALLIN’ ME BACK
Man that felt good didn’t it! So good in fact that you’ve done another one like it but a bit faster!

11. 7AM TO SEVILLE
Time for this LP’s surprise treat maybe – an evocative Spanish-themed funk instro with yet another crisp break in the middle…

12. ANOTHER SUNRISE
…and…it’s nearly the end – maybe lob on one that sounds a bit like the old band, yeah?

COMMENTS:
Definitely the best thing ever from Hannah Williams. Fuel for many a late night and plenty to soundtrack a heart break. Super tight new band – more emphasis on funk grooves but still plenty of soul and both Muscle Shoals and New Orleans influences shining through.

BEST TRACKS:
Tame In The Water, Dazed And Confused, Ain’t Enough, 7AM To Seville
(Out 11 November on Record Kicks)

Posted on 9th November 2016 no comments