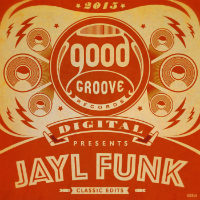 The goodness just keeps coming doesn’t it? Here’s Jayl Funk with a characteristically party-style re-funk of numbers by Rufus Thomas, Ben E King and OV Wright plus one I just can’t place and I’m really going to kick myself when I find out, oh the shame of it. This set is precisely what a good set of edits should all be about. Two of the tracks in their original form (those by Ben E King and OV Wright) would be way too slow to cut it in a party breaks/ funk, hip-hop set but thanks to inspired intervention by JF they are now able to cut it like a bastard. Rufus Thomas on the other hand was generally not a man to turn in something laid back and indeed 6-3-8 (That’s The Number To Play) wasn’t – but it’s now got spades more percussive punch. As for that troublesome one that I can’t place, let’s just say of it that all the signs point to the original having been treated sensitively but in such a way as to maximise all the stomping disco-funk potential. Boom!
(Out now on Good Groove Records)

Posted on 6th November 2015 no comments