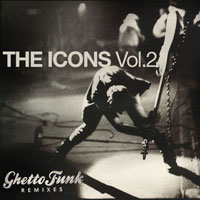 Looks like Christmas just came early in the ghetto funk universe for here is volume 2 of their ‘Icons’ series. And, ‘What is in Ghetto Claus’s bulging sack?’ you ask – like you need to. Basically twenty tracks from eighteen big scene names remixing names of big scenes of yesteryear. Expect to find the likes of Badboe, The Breakbeat Junkie, Slynk, B-Side and about a million others (well, fourteen) giving the big breaks, booty-ass, bass wobble, rework love to anyone from the sublime (George Clinton, The Clash, Led Zeppelin, De La Soul) to the ridiculous (Hall & Oates, Status Quo), I shit you not. God knows what possessed Funkanomics for the latter cheesefest – one can only assume it was some sort of Teutonic joke. Especial props to Dancefloor Outlaws and The Captain though for the best grooves with their re-rubs of Eric Clapton’s Cocaine and The Doors’ Peace Frog respectively. Become a member of ghettofunk.co.uk member and…
Cop your FREE DOWNLOAD of Ghetto Funk Allstars’ Icons Vol 2 HERE
Icons Vol 2 – The Ghetto Funk Remixes by Ghetto Funk

PRESS RELEASE
The sequel to last year’s epic free album, we have focused on the GF sound with a few surprises to keep it fresh, 20 tracks from 18 bright lights in the scene. This is FREE to our members.

Posted on 10th December 2011 no comments