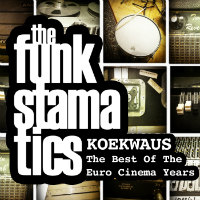 Looks like The Funkstamatics (a.k.a. the band formerly known as Euro Cinema) have been having rather a lot of success on Spotify these days recently clocking up an impressive one hundred thousand plays of their 2013 single Koekwaus. Thinking that perhaps they ought to celebrate, the band had a ponder about how they could top the original version of this guitar-n-Hammond-heavy beast and decided they might throw in a blaxploitation brass section courtesy of Efraïm ‘Amsterdam Funk Orchestra’ Trujillo. Which is precisely what they have done – and you can get your hands on the bad boy known as the Koekwaus (100K Horns Mix) as part of the band’s new comp. Koekwaus – the Best of The Euro Cinema Years.
(Out 15 September on Funkstamatic Records)

Posted on 1st September 2018 no comments