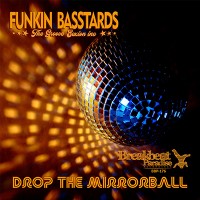 With a title like Drop The Mirrorball and cover art like that, you can probably already sense that this is the second disco-friendly payload today – in this case from Funkin Basstards. The four-tracker is the second BBP EP this year and also the duo’s second for the label. A mainly vocal affair, it finds four-to-the floor music shatter in a variety of directions. Sofia Kamina features on two tracks – the nu(-matic) disco and almost post-punky 2000 along with Feel The Vibe which combines nu-disco energy and Cameo-esque stylings. The balance is made up by bass-slapping Kurnel MC vehicle Soul Disco and the closer and title track which doesn’t let the pace up a single jot.
(Out now on Breakbeat Paradise)

Posted on 19th February 2020 no comments