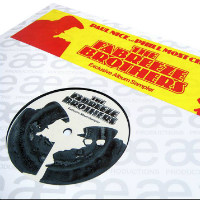 The full length Fabreeze Brothers LP is due soon but just to get you champing at the bit, a four track wax LP sampler characterised by Paul Nice‘s minimal, funky, MPC-n-samples-based beats and Phill Most Chill‘s lyrical acrobatics is on the way first. Golden Crown is PMC’s semi-biography of a crate-digger while The Break Down uses Led Zep’s When The Levee Breaks – er – break combined with what sounds like a Horace Andy sample. At 71 bpm. Undaunted by the lack of speed, Phill prevents the whole thing sounding like Massive Attack by delivering twice as many syllables per bar as a normal mortal in battle rhymes like this: “Actually most rappers were manufactured in factories/ mass-produced and packaged without including the batteries.” It’s the sort of effortless lyrical artillery displayed on uptempo opener Power Man & Iron Fist which begins, appropriately enough, with a snatch of Bruce Lee dialogue from Enter The Dragon and on which Phill is pleased to inform all mic rivals that “This is the art of fightin’ without fightin’/ Writin’ a rhyme so exciting, kick you’re teeth out you’re still bitin.'” There’s even time to squeeze in a hip-hop ‘lesson’, How To Cut And Paste (Lesson 1), a la Double Dee and Steinski, the introduction for which (courtesy of PMC) doubles as a tribute to the producers behind the lessons.
(Out soon on AE Productions)

Posted on 27th November 2014 no comments