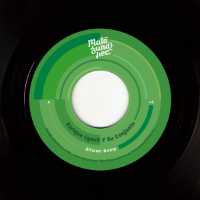 Continuing their services to obscure Afro-Latin funk, Matasuna Records comes correct with yet another official reissue 45, this time showcasing a brace of cuts by Enrique Lynch – or rather Enrique Lynch Y Su Conjunto. The A-side is African Bump, an organic sounding slice of funky disco with an Afro-Latin vibe pursuing a horns-led and multi-layered percussive path through the sweaty confines of the dancefloor. Meanwhile, over on the flip you get Lynch’s cover of The Nite Liters’ K-Jee, on which he retains the American original’s energy whilst giving it a totally tropical makeover.
(Out now on Matasuna Records)

Posted on 16th December 2018 no comments