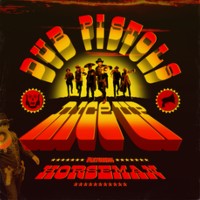 With new single Nice Up, Dub Pistols return to classic dancehall-inflected big beat (or perhaps that should be big beat-inflected dancehall) a.k.a the once and future sound of themselves, The Freestylers, The Nextmen and Lionrock. This one features legendary toaster and singer Horseman giving it large over a reliably bouncing breakbeat-powered skank. The ‘Pistols recently celebrated their twenty-fifth anniversary and it turns out that Nice Up is the first single off forthcoming album Frontline. As to whether it (or the band themselves) can nice up the dance, look no further than the video which shows them effortlessly doing precisely that.
Out now on Cyclone Records