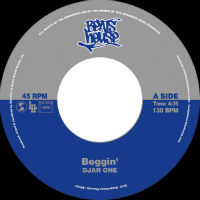 I’m beggin, beggin’ you-oh-hooh, won’t you make a forty-five edit of some rather big old northern soul tracks? Hmm – alright it doesn’t quite scan doesn’t it? Happily there are no such issues with either side of this sureshot 45 from the man Djar One (which follows up his last 45 edits), both of which groove like a bastard. Well obviously, they would since the source material consists of a brace of decades-old, tried-and-tested northern soul bombs. The A-side reworks Four Seasons classic Beggin’ with the original’s syncopated beat now heavily accentuated and foregrounded along with various other tweaks including section extensions. Meanwhile the flip introduces the stomping Lynn Randell original of Stranger In My Arms to a much heavier syncopated beat. Job’s a good ‘un – as they say.
(Out 30 July on Beats House Records)