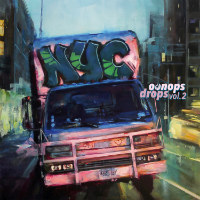 Stand by for Oonops Drops Vol. 2, the second volume in a multi-genre compilation series from Brooklyn Radio’s DJ Oonops which comes out on Agogo Records at the end of the month. It seems our man spent more than a year putting the funk, soul, dub, jazz, beats and hip-hop encompassing double vinyl project together and you know with that level of time investment, there’s going to be a big pay-off.  Which is why you can expect most of the tracks included in the fourteen-deep set to consist of exclusives or first-time-on-vinyl business from an array of talent both better and lesser-known. These include a Manasseh dub remix of the Ce’Cil & Toddla T-featuring Make Up Your Mind from legends Coldcut and Soopasoul’s trip-hoppy remix of Chasing Shadows by John Turrell’s. What you want to particularly keep your eyes peeled for however are a dope cover of No Diggity from Texas funk outfit and MB favourites T Bird & The Breaks (currently, not to mention sadly, on indefinite hiatus), the trip-hop class of Tokyo Jazz Freak from 45 (a.k.a. Swing-O), Amy True’s blistering brass-drenched Save Urself featuring Nubya Garcia and the gorgeous jazzy dreaminess of closer Tibb’s Nightmare from Tibbs One.
(Out 27 September on Agogo Records)

Posted on 3rd September 2019 no comments