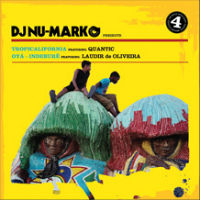 Dj Nu-Mark continues the innovative release schedule for his Broken Sunlight album (every track released on a single!) with the fourth in the series – Tropicalifornia and there’s no sign of let-up in the quality, or the variety, yet. Series 1-3 yielded hip-hop, disco breaks and funk – this one is a chilled splice of organic latin breaks and hip-hop stylings (there’s a bit of scratching) complete with that late-afternoon/ early evening barrio sound. Also, did I mention that this release is a collaboration with the man they call ‘the bandleader of the Brighton barrio’ – Will Holland a.k.a. Quantic. Well, I say ‘they’ – I mean ‘me.’ Still – it’s a least as momentous a hook-up as last time’s with A-Skillz since Quantic is both a producer in his own right and live perfomer with the Quantic Soul Orchestra and the Combo Barbaro. Also comes with drumapella version plus another latin instro Oya Indebure in original, instro and acapella versions. Cop it free below for the price of your email and wax heroes can pick it up on vinyl via their favourite supplier.
(Out now on Hot Plate)
See also:
DJ Nu-Mark Series 3
DJ Nu-Mark Series 2
DJ Nu-Mark Series 1

Posted on 9th October 2012 no comments