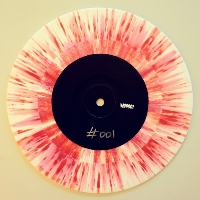 Hanging out for new wax from DJ Maars and the Easy Now Recordings camp?  You can rest easy then, because here’s the man himself with the first in a new run of back catalogue bangers on 45. And as anyone who follows Maars will know – that’s some back catalogue – exemplified on this white and red splatter vinyl 7″ release by Smokin’ Funk b/w Ruffneck Rockas. The former was last heard of in digital-only form on 2014 Tru:Funk comp. Tasty Beats Vol. 2 and consists of Biggie vs ragga vocals over a mid-tempo reggae hip-hop riddim. Dope as that is however, the monkey’s preferred cut is the latter – Ruffneck Rockas – also from 2014, though this time from Maars’ Booty Fruit EP Summer Soundbwoy Vol. 2.. That’ll be another sizzling reggae hip-hop beat plus MC Lyte once more expressing a preference for a bit of ‘ruffneck’ then.  This is a strickly ltd. 300-pressing run and it’s already out so so don’t let the grass grow under your feet (or smoke it) before it sells out like all the other Easy Now wax.
(Out now on Easy Now Recordings)