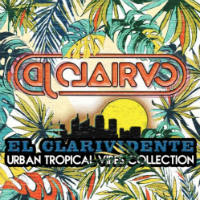 When better to release an album redolent of tropical heat than at the point in the year when the nights are longest and coldest? And that is precisely what the MustBeat crew’s DJ Clairvo has done with El Clarividente having used his powers of prescience to judge it the opportune moment to collect nearly a decade’s worth of Latin-influenced party breakbeat gear together and unleash the results. A few years ago, of course, you couldn’t beat Latin breakbeat tracks off with a shitty stick but times have changed and in the last few years the trend seems to have subsided. More’s the pity because, for the life of me, I can’t remember a bad one – an opinion that still hasn’t changed with this compilation.

Featured are three collabs. – two with The Worldstylers (the bouncy Hello Everybody and piano banger No Somos) and the sinuous, glitch-tinged, bass of Baila Boom with DJ Zsazsa. Clairvo’s previous Latin drops for a range of labels appear too – Katakana Edits releases Shaka Boom and Lovely TV, the castanet-flourishing Lift Ma Soul off Beatnik City’s The Latin Leaks and 2010 Resense release (and Latin big band b-boy banger) Crown Royale. He’s also bunged in two previously unreleased cuts as well – accordion-laced closer Sonido Latino and the squelchy, bass-heavy uptempo Afro-Latin funk of Come Be Ya. It’s almost like he knew what you wanted to hear before you did!
(Out now on MustBeat)

Posted on 22nd December 2018 no comments